Our previous warning system was purely based on meteorological thresholds. What this means is that we have only been issuing a warning if a certain criterion is met. For example, a warning for strong winds would only be issued if the winds are expected to reach 35 knots or approximately 70km/h. Therefore, a place that frequently experiences strong wind will often receive warnings, but the people and infrastructure in the area are accustomed to the strong winds and these winds rarely cause any impacts.

The colour coding as well as the numbering is determined by combining the level of impact with the likelihood of that impact occurring. This means that the forecaster will decide what the possible impact could be as a result of a certain hazard (rainfall, for example), with the input from the local disaster managers. Then, using the numerical weather prediction models as well as local knowledge of antecedent conditions (any previous rainfall), the likelihood of that impact is determined. 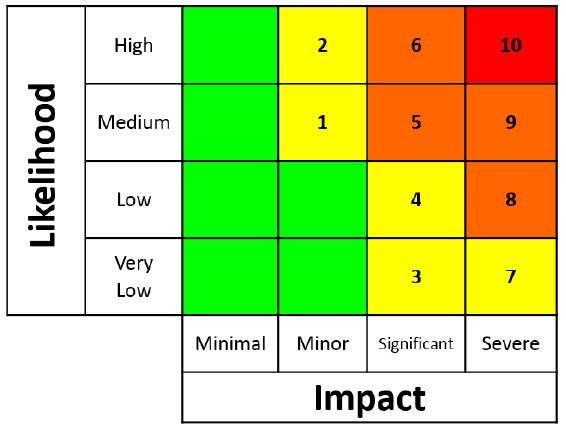 No, this is not to be confused with tornado warnings or the evaluation thereof. These levels are just to give an indication of where in the matrix the warning is situated in terms of impact and likelihood level.

SAWS has partnered with the National Disaster Management Centre for this project. Disaster Management as a whole, is a key of SAWS, as we communicate with them as soon as we see that there is a possibility of hazardous weather. A very good example of this relationship was during what has been called the “CapeStorm”. The forecasters first notified the disaster managers of the strong winds the week before the actual storm.

Leading up to the event, meetings were held, where the heads of the emergency responders were all informed of the possible extreme winds. It was during these meetings, using the information supplied by the forecasters, that the decision was made to close schools for a day. This was the first time that such a decision was taken, and it worked out to be a great success.

Yes, we have been running pilot tests with our disaster managers, so that we can make improvements before introducing it to the general public. These pilots have been very successful as the feedback we have received from the disaster managers has been very positive. One of the main things they have mentioned is the fact that the warnings are far easier to understand, and they can now put measures in place ahead of possible hazardous weather.

The main purpose of the Impact-Based SWWS is to make sure the warnings issued are easy to understand. This is so that the necessary actions can be taken ahead of time in order to mitigate adverse impacts. These warnings will not make use of meteorological jargon and using a robot colour coding, this simplifies the warning levels and need to respond to them.

This is also something we are constantly trying to improve by having public awareness and outreach campaigns. We use these opportunities to educate the public to become a more WeatherSMART nation, which is Safe, More informed, Alert, Resilient and Timeous in response. We also emphasize that the SAWS is the only authoritative voice when it comes to weather-related alerts and thus should be consulted to verify warnings.

In South Africa, most disasters are weather-related. In addition, the effects of climate change are such that there is an expected increase in these intense weather events. Therefore, it is very important for people to closely monitor all weather-related warnings and to take precautionary measures ahead of the anticipated event. This includes following advice by disaster managers as well as emergency personnel.

Yes, these warnings are freely available to all. The SAWS use as many forms of media as possible to get the warnings to the general public. This includes the use of social media platforms, such as Twitter and Facebook. We also send our products to print media (newspapers), television as well as to more than 140 radio station across the country. Our warnings are also displayed on our website (www.weathersa.co.za). We do however, need to keep on working on other ways that the warnings may be disseminated. This includes making use of indigenous methods of communication.

The public need to be aware of their surroundings, for instance if you live in a low-lying area, close to a river and there is flooding expected, you need to understand that you might need to be evacuated/relocated to higher ground. Schools also need to be conscious to the fact that if there are pupils that cross small streams to get to school, and rainfall, leading to flooding, is expected, those schools would need to be closed to avoid children putting themselves at risk of drowning.

Considerable improvements have already been made with the advancement in computational power. This has resulted in an increase in accuracy as well as lead-time over the years and is expected to improve further moving forward.

Currently the SAWS issues seasonal forecasts, which is a very broad forecast indicating the general conditions for the next few months, comparing them with the climatological average. Then, we also issue 7-day forecasts which provide a lot more detail, including possible severe weather. What must also be remembered is that, just like with any other type of prediction, weather forecasts become more accurate closer to the time. However, long term forecasts are still useful, provided the user fully understands the product and applies it appropriately.

Yes, climate change is expected to result in an increase in severe events and in addition with a rapidly increasing population living in vulnerable areas, we need to constantly adapt accordingly and make sure we build a resilient nation that is prepared for whatever the future holds.

Impact tables have been developed with our disaster managers. These are individual tables for each hazard and contain impacts at different levels of severity, ranging from Minimal to Severe.